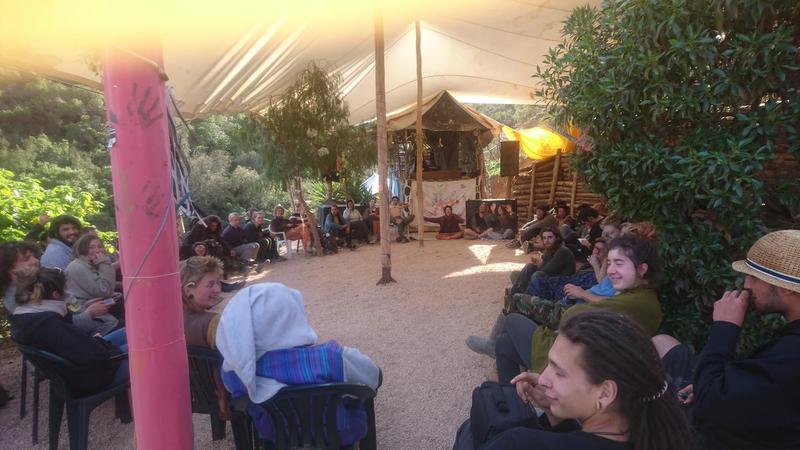 In recent years I’ve been interested in power and how it operates in groups that aim towards a non-hierarchy, non -authoritarian coexistence. From the outset I imagined that achieving this  in community life would be easy, right? Given the fact that people would share this common end it would be a relatively straightforward process towards anarchist bliss. Alas.

I also had a chance to observe community action whilst studying an ethnography module at university. The Occupy Movement was the target. I interview a leader of my nearest Occupy group and asked him how power was distributed. He more or less confirmed my idea that certain individuals were in receipt of more power than others. For practical reason, of course.

I noticed that while participating in General Assemblies (group meetings, open to all, including undercover police) and auxiliary meetings that the same people would organise and lead debate, even encouraging select others up the informal hierarchical ladder to a position of relative group security, respect and validation. The same people calling for revolutionary change were adopting control and command techniques that was surely part of the problem to begin with and klin the process of creating a new class for themselves.

Or were they? Is not the case that those with the talents for organising a disparate group of people (and a mighty mixed bunch they were too, revolutionaries were in the minority, by a long way) should act for the greater good of the community by taking master of the running, the bureaucracy if you like, of the community? Especially if they’ve had experience organizing social movements? For efficiency sake the answer is always Yes. These leaders, probably the same people who started the Occupy protest, should be conferred with the authority to direct the movement as left to the wily dictates of novices the group is likely to disintegrate before it has ever started. But then that authority confers power and it is very addictive.

Organise, lead, security, respect and validation: all positive attributes we would surely wish to have in a community. It’s better for your health. Fact. Conversely the opposites: being commanded, lack of input, insecurity, disdain and invalidation make you feel bad and is bad for your health; social rejection and physical pain share the same part of the brain, the anterior cingulate cortex (Eisenburger & Lieberman, 2004). Because it is pain it can be medicated with painkillers (Dewall et al, 2010). The power to grant and confer group acceptance to others is a very effective tool in its own right.

Who hasn’t known, for example, an influential group member use this power to confer privilege to their own personal benefit? Nicest accommodation, access to vehicles and the kitchen and privileged internet use, hot showers on cold days when “doing office work”. And who doesn’t find this power attractive? It can, and does, bring with it strong sexual advantage – the abuse of which is often times most published: Bill Clinton, David Mellor, Paddy Pantsdown and just about every US politician. But it’s easy to forget that sex can, and ideally, be fun for both parties, so I hope all involved got something out of it apart from the cheque for exclusive rights and a soiled item of clothing.

Association with the powerful can bring reflected glory and rapid assent within a group hierarchy. But are the drives for group acceptance just another form of group security and should another more powerful group come along, would not we, then seek their approval in order to maintain something of our own privilege? Possibly, especially if doing otherwise would mean extermination or group invalidation. Difficult decisions but our brains make the decisions somewhat easier in that they’ve evolved from centuries of battling with these choices and the result is our non conscious conditioning towards power, or more concisely those who wield it. Sometimes we want to share our genes with these individuals in the hope of that privilege for ourselves and our offspring. A life advantage indeed.

That’s why politicians wear ties and suits, that’s why authority figures wear uniforms and stand under flags; they want you to associate them with the still greater power of The State: to whom all shall bow, and then in the name of the greatest good they want you to serve them so they can serve others. Social constructs are created to reinforce the idea of subservience and service to an arbitrary “Greater Good” – the ideology.

A long leap from community organiser in a hippy farm to world leader, right? No, not really, the psychological pressures and pulls are just the same. The same dynamics operate but only on a smaller less innocuous level – although abuse at any level is still abuse.

So why this concentration upon power, hierarchy and ideology? Why because after a month if being here I’ve noticed my voice has more influence, slightly more. I am becoming a confederate pushed along by the hidden hand of social inclusion. People listen to me when I speak, not something that happened often upon my initiation. I’m being accepted by some of the long term residents who may feel slightly less queasy that their power is diminished by a potential competitor who may become a potential asset. And i came second in a talent contest last week; unfairly behind Jess but thankfully before Diana. Basically, so many, as usual, have left that the gaps have to be filled: the best sleeping spots, the better jobs and The Interesting Story Teller at the bar – although I can only be sure I’ve got the first two.

But isn’t this natural? Shouldn’t she who has been there the longest have the greatest amount of power, respect and validation? From a practical perspective of course they should, they know where everything is and how it all works (;-)) and the people who know how to fix it if it doesn’t (;-)). They have Experience – often underrated in the opinion of my dotage – and experience makes life easier, happier and more pleasurable. Being an experienced swimmer in a deep pool is more enjoyable than being a complete novice, same with skateboarding down a steep hill and climbing a mountain. And people are also attracted to happy people. Powerful, experienced, happy people are very attractive indeed. And being perceived as attractive is a very strong drive in us because it involves higher status which continues the virtuous cycle. Bliss.

But at what cost? Yes, there is a downside. A few. The first that springs to mind is the danger of unwarranted inflation of sense of self and importance to the group. We are all expendable and all are, and will be, replaced. Nobody is indispensable. And a fall from grace and favour can be a highly traumatic life event; tread very carefully. The second is the sense of attachment, one of the highest forms of spiritual wisdom is non-attachment, the Buddhists swear blind about it and just about every faith warns of becoming attached to the world and its pleasures: they are but illusions paving the way to arrogance, sloth and sin.

Who among us has lived in what Sartre would call Bad Faith? It’s where we define ourselves in terms of the role we play in society: I’m a teacher/nurse/fireman/psychologist/bricklayer/etc. and then acting in the ways and manner of that profession or occupation despite it being at odds with our nature and how we really feel? It may fatally distract us from our path? Thirdly and related, and one of may favourite quotes, it’s by Lord Acton:

If you’re not a sociopath already you’ll almost always become one.

That’s why anarchists try to examine power and its effects. And then try to minimise the damage it can do when concentrated down to a select few; a few who often make the decisions others are far more experienced and skilled to make. A good leader is self-reflective, always acting with the knowledge she doesn’t know but acts on contingency, and importantly knows they are not irreplaceable. But a great leader, in the compassionate, wisest and healthiest sense, is the leader who doesn’t want to be a leader but has it bestowed upon them by virtue of their experience and insight. They do exist. I’ve met one or two and they act as a kind of group elder who others go to to resolve disputes and drive new ideas. But they are the sort of person who yearns for the quiet life.

To resist the temptation of power and influence is difficult and that is why anarchist theory arrows towards the group participating in decision making. It minimizes the individual for the good of the group. Perhaps electing one time representitives to represent the group at conference. It’s also good for the individual as they are protected from the corruption of power.

So if you see me talking “above my station”, taking advantage or doing stuff that stinks of privilege talk me down. Help me.

Television: The Drug of The Nation

Over the hills and in the valley

Get all latest content delivered to your email a few times a month.